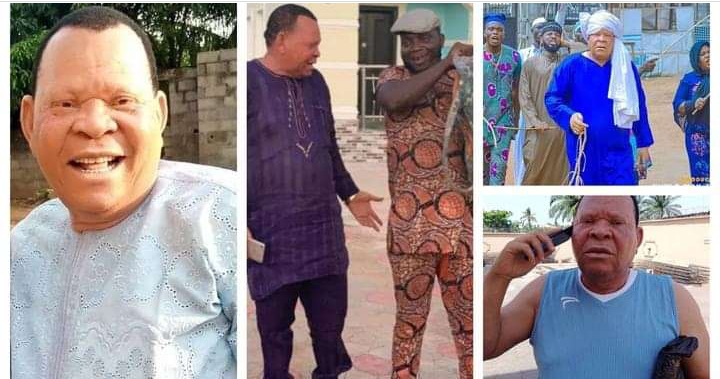 Currently the president of Association of Nigerian Theatre Arts Practitioners (ANTP), Prince Adewale Elesho is one of the veterans in the movie industry known for his advocacy for the promotion of morals and the Nigeria’s cultural heritage in Nigerian movies. In this interview by FEMI OGUNTAYO, the respected actor talks about why he left the movie landscape for some time, how immorality has eaten deep into the present day Nollywood and way forward. Excerpts:It’s been over 30 years on stage for you, how did you even start acting and what movie would you say brought you to limelight?

I started from Ilorin as an actor; we started by going around to perform stage plays in schools. But the challenge then was the producers, they would always want to date the fine girls among us, (Laughs), in fact, they don’t care if she is your girlfriend, they would still want to date her. Then I was unmarried and my friend’s girlfriend became a victim. I remember we went for a rehearsal at the Nigerian Television Authority (NTA) in Ilorin; it is a thing I wouldn’t forget in a hurry. I told my producer that she was my friend’s girlfriend, I won’t mention the producer’s name now because we have now become good friends. He insisted that he wanted that my friend’s girlfriend and because I refused, he condemned my act in the rehearsal. So, later, there was this boss of ours, who came to visit us from Lagos, Adeyemi Afolayan (Ade Love), he came to see one of our bosses at NTA Ilorin. He watched our rehearsal and loved the way I acted.He made a funny remark that day and said, “This is an albino acting and it is really interesting”, I just laughed. Then he asked jokingly if I would be able to see the road to Lagos, then I replied him and said I was only an albino and not blind. Then he told me they were going to shoot a move in Lagos titled ‘Taxi Driver’ and gave me an invitation letter to come to Lagos for the production of the movie ‘Taxi Driver’. We have never been to Lagos then for a movie production, because there was no video then, it was celluloid. That movie ‘Taxi Driver’ was the movie that actually brought me to limelight; because it was the first optical film I featured in and it was there I was able to meet with other veteran actors in the movie industry today. I was able to meet fellow actors like Baba Lere Paimo (Eda), Adebayo Salami (Oga Bello), Wole Olowomojuore, Ogun Majek in Ibadan, Olofa Ina, Toyosi Arigbabowo and many more. So that was how it all started for me, after that I did up to 14 optical movies before the advent of video.I featured in Omo Orukan by the KeriKeri group, I also featured in Ayanmo by the Ogunde group, I featured in Ori Olori by Ade Love after Taxi Driver, I also featured as the prominent actor in one optical movie entitled: ‘Eyin Oku’ and many more. I just thank God for grace.What has been the motivation all these years regardless of all the challenges faced on the job?Well, you see any job you do and you make people smile even without them knowing you personally, will definitely motivate you. When people see you and they always want to associate with you and take pictures with you, it is a thing of joy and that will definitely make you fulfilled on the job. There was a day on Lagos-Ibadan expressway, this was about 25 years ago or thereabout. My car broke down around Shagamu because my car’s fan belt was damaged and a man who passed by just reversed his car and came to meet me. He then asked if I was Adewale Elesho and I said yes, I am Adewale Elesho.He was so happy, he hugged me and said his wife was a big fan of my works and he is also a fan too. You won’t believe he took me to Shagamu, got the fan belt for me, brought a mechanic to fix the car for me and even asked me to follow him to a canteen in Ibadan where we ate together and he took pictures with me. He was from America. After that, he gave me N20,000. Imagine the worth of the money then. So many things like that are things that kept us going.

Do you think the Nigerian movie industry is developing at the right pace?

It is quite unfortunate that the movie industry is not developing in the right way; in fact, it is getting worse by the day.In what way?

Look at the movies you watch these days, are those movies? No, they are not. Movie where you have to bleach your skin before you are cast to play a role, must you bleach your skin to be a star actor? They will even act and almost have sex on set, is that how we started? Did Mama Efunsetan bleach her skin before she was known by everyone? A lot of stuffs have been polluted in this job. But as the President of the Association of Nigerian Theatre Arts Practitioners (ANTP), I have some elders in the industry, veterans in the movie industry, who are members of the board of trustees of the association, people like Lere Paimo, Jimoh Aliu, Baba Elebuibon, Alhaji Kareem Adepoju (Baba Wande), these are veterans in the industry. They have seen a lot and have gone through a lot in the movie industry and will not allow us to produce movies like that.What do you think could be done to curb all the immorality in the movie industry?You see all those veterans I just mentioned, they produce movies that teach morals and tradition. As a person also, I don’t think I have ever acted in a movie and I feel like I acted in an immoral way, God forbid. The President of TAMPAN, Bolaji Amusan (Mr. Latin) and I will come together to see how we can sanitise this job. Outside the country, in places like America, if you see the way they condemn our movies, they would say, the movies we produce are half English Language, half Yoruba Language and that we can never be more English than the English people.They said the reason they buy Nigerian movies is for their kids to learn the Nigerian languages and culture but they don’t find in our those movies anymore. That is why I have told those veterans that they should not throw away scripts of their old movies, and that we will still have to go back to those historical movies that teach morals and the Nigerian culture.

what are the steps you have taken or achievements in this regard as the President of ANTP since your emergence?We were just sworn in when Coronavirus came in, in fact, we were planning our inauguration ceremony weeks before Coronavirus came. So we have not really done much.In 2018, you said in an interview that the reason you have not really been on set was because of piracy. Would you talk more on this? And have you gone back to movie sets now?It was not because of piracy alone; I left then because of the kind of movies that were produced in the industry too. Where they practice nudity, people will see us outside and condemn us, we will be the ones to face criticisms. There was a particular day someone faced me and accused me, even though I gave him his reply too. He said the way our movie stars expose their bodies in movies these days is alarming; he asked if we could allow our children to expose their bodies like that too? Then I asked if he doesn’t watch Jide Kosoko’s children in movies, or Abebayo Salami’s children. Do they act nude in movies? Then I told him this showed that they are simply portraying what they learnt from their parentsHave you gone back to movie sets now?Yes, I have since gone back on set. Let me tell you, even before Coronavirus, this year alone, I have featured in up to six standard films. Gabriel Afolayan did a movie in Ondo State which I featured in. There was this movie in Lagos too which also features several movie stars too in which I featured before the arrival outbreak of Coronavirus. So, by the grace of God, I am back on set.Looking at the increase in the number of rape incidents in the country, there beliefs out there too that a lot of sexual harassment happen in the movie industry, especially, among producers and upcoming actors. What’s your say on this?The thing is that, any lady who enters into the movie industry as a ‘runs girl’ will leave as a ‘runs girl’.

There are a lot of ladies who come into the movie industry because of the love, or let me say lust they have for a particular star actor and once they join, if care is not taken they must look for ways to lure the star actor to sleep with them, except the star actor refuses to be lured into doing such. I am not saying some producers don’t ask fellow actors out, but once you are good at what you do, you will definitely get your roles.When should we expect new movies from you, now that there is partial ease of lockdown?We have decided not to start work now. In ANTP, after consulting members of our board of trustees, which comprises of veterans such as Chief Lere Paimo, Chief Jimoh Aliu, Dr. Yemi Farounbi, Asiwaju Oyewole Olowomojuore, Chief Yemi Elebuibon, Alhaji Kareem Adepoju, Chief Mrs. Florence Amole, Elder Taiwo Eletu and many more, we have agreed that no location for now. The government has told us that there should be social distancing and we should make use of our nose cover at all time. What type of movie will we shoot while observing social distance and using nose cover? That is why I contacted all my governors and my fellow executive members. I told my secretary, Olarawaju Ayodele, and my deputy president Rufai Abiodun Odua, that we cannot shoot movies without violating the COVID-19 rules. So, until the government gives us directives to resume work, we haven’t returned to movie locations.Your son, Yemi Elesho is also doing well in the entertainment industry, especially in the content creation industry. How do you feel about what he has achieved for himself?Of course I am happy about it and I am happy for him. Even though at the initial stage, I did not want him to join the entertainment industry because I wanted him to go to school so he won’t be like us, who did not really study more. Thank God he later went to school and now he is doing well and he can also catch up with his fellow actors in the industry who are also children of movie veterans.Your words to your fans?

We thank our fans for the support and for always believing in us.